Blog » Can an Electric Fence Kill a Dog?

Can an Electric Fence Kill a Dog?

Electric fences are tools known throughout the world, thus facilitating the protection of animals in large or small spaces, preventing them from leaving or entering unknown people into the territory. Those with the highest discharge are associated with cattle raising, and agriculture, in general, is located in large extensions of territory for protection in these spaces.

There are many types of electric fences, especially since there are those who implement them to protect their pets and place them in gardens to prevent them from escaping or other people from entering. Those designed for dogs have a discharge standard that should be paid close attention to before purchasing, especially since they are associated with the characteristics of each dog.

Not all dogs have the same size, which has to be associated with the discharge level so that they do not go beyond the established limits. Based on this, having a dog in a territory with an electric fence for cattle is very dangerous because discharges can threaten his life or cause irreversible damage.

Here you will be able to know everything related to it, taking into account the revisions that you must carry out before purchasing the fence you want to install for your dog.

Can an Electric Fence Kill a Dog?

There are electric fences that vary in characteristics since not all of them have collars, and they are only located on the limits, which is why they generate shocks to the dogs when they rub against the fence. They tend to be less efficient because the dogs avoid this friction with the fence and manage to dodge it to escape. It is much better to resort to those associated with collars.

As said, a battery gives the collar correction with several charges. The cable is placed on the ground to signal the collar to generate the discharge. The cable does not have an electrical charge inside it, and this means that the system, in general, does not harm the dogs when they create according to the limit that the dog can withstand.

It is a good tool to train pets and prevent them from dying in the attempt, but this does not mean that damage is a cause in the most extreme cases.

What are the Dangers of Having an Electric Dog Fence?

Although these fences design to prevent the greatest amount of damage, they may be in the long term and affect the life and natural development of the dog. Dogs can become fearful and progressively aggressive because they damage when shocked by the collar.

Dogs with these discharges can spasm, even after going through a lot of it, but the most serious thing is that trauma create in the area of ​​the discharge that causes pulmonary edema. With this, the dog is in great anguish, and it is unlikely to stop over time since the threat will always present itself.

Can an Electric Cattle Fence Hurt a Dog?

As discussed earlier, fences design under a specific electrical discharge level, and cattle fences are different from dog fences. Dogs, in most cases, are fenced next to a collar that is responsible for carrying out discharges in a measurable way.

When the fences are for cattle, collars are rarely placed on the animals because they tend to be many, leading to the fence is the one with the complete connection to electrical current. In this way, the animals prevent them from leaving, or people enter to steal or damage them, giving powerful shocks that can be very harmful to people, smaller than livestock.

For this reason, a discharge of this level for a dog can cause a lot of damage and, if it is very high, can cause them to die if they do not have the necessary attention to avoid it. Even for dogs that survive it, irreversible damage can do to their body and throughout their nervous system.

Can an Electric Fence Kill a Small Dog?

When electric fences no purchased according to the dog’s size and weight, this can happen in the most extreme cases, but it is unlikely. Although the damage may be more likely, the dog’s death could be from cattle fences.

If the dog is a Pekingese and the design fence for a Doberman, it is most likely that the damage to the dog will be very serious and could kill it if the Pekingese is not attending. When the shock is from a collar, it becomes more dangerous because these are placed directly on the dog’s neck, and the shock lasts for a few seconds, but it can be very harmful.

What Happens When a Dog Touches an Electric Fence?

The pet fence consists of a cable responsible for generating an alert to the collar on the dog’s neck when it is about to cross it, generating a small electric shock to the dog so that it does not do so. The first few times, it can be stressful for the dog and generate attitudes that lead it to be aggressive because it cannot function as it wishes.

However, in the long term, it can be considered a good strategy for recurrent training in which the dog is not to leave established territories and, over time, will stop trying to do so. It is of great help for neighborhoods where pets have to be kept inside the house or without leaving the garden’s limits.

Do it without causing very complicated damage. It is necessary to have the physical information of the pet and know if it has medical conditions that small electric shocks can worsen. If this is yes, it is not recommended as a good limitation option because it can backfire on the dog over time.

After your purchase, it is important to consider a correct installation process according to the type of electric fence used. Those cattle are usually very extensive and require arduous connection protocols, while dogs are simpler when it comes to land that is not so large and has a complementary collar.

Try to train the dog not to approach the perimeter and thus avoid as many shocks as possible, making the fence used in extreme cases. It is necessary to do recurring maintenance and charge the collar batteries when needed, information determined by the manufacturer according to the collar’s performance.

It is always better to use waterproof options to avoid damage from humidity and water, especially when the pet is constantly playing with water or bathing very regularly at home. Putting all these tips into practice, you can have a more pleasant experience for everyone involved, avoiding irreversible damage to pets.

All dog escape warning systems are usually very safe, and electric fences complement innovation, technology, and safety in the same alternative. Although it is necessary to maintain certain care according to your dog at home, it is unlikely that damage will generate that could threaten its life and physical integrity.

In the case of cattle fences, you have to be very careful because their electrical discharges are more powerful and can be very harmful to dogs and humans. Before any choice, it recommended consulting with specialists such as fence manufacturers, veterinarians, and electricians.

In this way, you can have greater security about the choice made, given the need for a protection system for dogs. 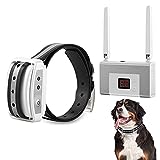